We are looking for a better life

“Immigration laws are the only laws that are discussed in terms of how to help people who break them.”

The Dustin Inman Society is pro-enforcement on borders and immigration laws and made up of Americans of all descriptions, including real, legal immigrants. We are not and never have been “anti-immigration or “anti-immigrant.”

On American immigration laws, there are essentially two sides: pro-enforcement and anti-enforcement. The Dustin Inman Society (DIS) is adamantly and actively pro-enforcement and pro-borders. DIS was formed with personal funds by D.A. King in 2005 and operates solely on donations from the public.

Since 2006, we are proud to have been able to help draft multiple pieces of illegal immigration–related state legislation that are now law in Georgia. We work for actual enforcement of these acts, including Georgia’s E-Verify laws.

We submit that not enforcing our immigration laws is tantamount to open borders which is the real goal of many of the huge number of anti-enforcement groups that are funded by corporations all over the U.S. – including here in Georgia. These funders include George Soros, the Coca-Cola Co., Georgia Power, Southwest Airlines and Cox Enterprises – owners of the liberal Atlanta Journal Constitution newspaper.

The mostly far-left, anti-enforcement groups are incapable of any tolerance of opposing opinions and cannot present any part of a reasonable argument to support their endless effort to end immigration enforcement. So the game is to ridicule, discredit, smear and marginalize the majority of Americans who want an equal application of the law. The anti-borders lobby is well paid to spread their hate and to demean pro-enforcement Americans.

We support putting Americans first and insuring that American workers flourish with the guarantee of safety and security in their own country.

Perhaps the most effective and widely used tool aimed at confusing the public on the intentions of our work is to intentionally and endlessly blur the difference between real immigrants who join the American family lawfully and illegal aliens who either cross our borders illegally or scam the system by entering the U.S. on a legal, temporary visa and then never leaving.

Illegal aliens are not “immigrants” – real immigrants do not require amnesty

The anti-borders lobby labels anyone who wants our immigration laws enforced as “anti-immigration” or “anti-immigrant.” We are neither. We are oppose illegal immigration. We push for sustainability and sanity in immigration numbers, and for assimilation of immigrants into the American melting pot.

Supporting English as the official language of government is not “anti-immigrant.”

This effort at ridicule is carefully taught to generations of brain-washed, carefully-trained and organized anti-borders activists. Real debate is out of the question for these radicals, as they cannot depend on the law, commonsense, patriotism or majority public opinion or support. It is important to know that these groups depend on the media to constantly hide the real issue and facts.

Along with the Associated Press, the Atlanta Journal Constitution is perhaps now the most dedicated to blurring the truth on illegal immigration.

My adopted sister is an immigrant. We are proud of the make-up of our Advisory Board and that it includes black Americans, Hispanic Americans and immigrants who value the importance of honoring the long tradition of immigration by unapologetic enforcement of our laws. We are pro-immigrant and pro-enforcement.

We are proud to have all the right enemies. It is important to understand the history and agenda of some of the most well-funded, loudest and most hateful critics of our work. We have an in-progress page dedicated to the illegal alien lobby, but below we cite two of the most disgusting proponents of hate and smears on our pro-enforcement efforts.

The ethnic-based MALDEF – usually depicted by media as a “civil rights” group – is known for a defiant 1998 statement from co-founder Mario Obledo: “California is going to become a Hispanic state and if anyone doesn’t like it they should leave.” Followed up with “they ought to go back to Europe”

In 2004, Georgia’s “flagship newspaper,” the liberal AJC, served as Dinner Chair for a glitzy Buckhead MALDEF fundraiser. MALDEF is on the list of anti-287(g) groups. GALEO is often quoted in the liberal AJC.

For a more detailed look at GALEO you can click on the below graphic to see a series of facts we put together in 2015 when then-President Barack Obama nominated a then-GALEO board member, Dax Lopez, for a lifetime seat on the federal bench here in Georgia. We are extremely proud to have exposed GALEO, Jerry Gonzalez and Dax Lopez to the U.S. Senate Judiciary Committee and watched as Lopez’ nomination was blocked. We offer special praise and acknowledgment to Georgia Senator David Perdue for his courage and leadership in the GALEO/Lopez caper. 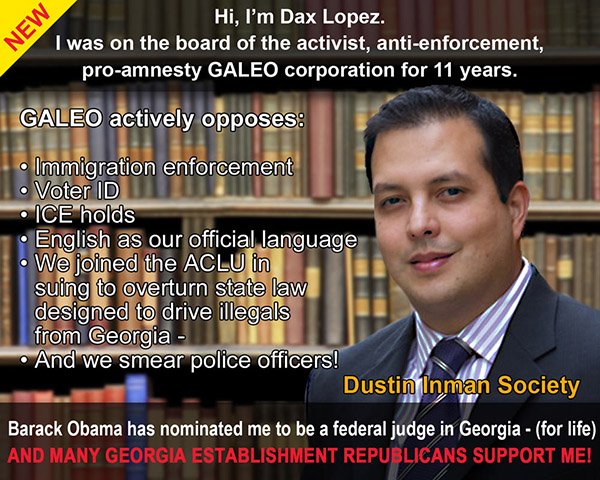 The SPLC has been exposed as being a “hate mongering scam” multiple times in numerous mainstream sources. In March of 2019 stories of pointed allegations of sexual harassment and racial discrimination, from SPLC employees finally made their way into even liberal news outlets including in the New York Times. We have not yet located a matching report from the SPLC-quoting AJC on the scandals.

Perhaps our favorite description of the SPLC comes from a former employee who is well known for willing participation in the smears that the SPLC uses to attempt to silence the pro-enforcement Americans. You can read an expose from former SPLC staffer Bob Moser “ we were part of the con and we knew it” here from the New York Magazine.

‘They weren’t even trying to be diverse.’

The center’s problems did not end there. Throughout its history, the organization’s leadership has mostly been white, and in 1994, The Montgomery Advertiser reported on complaints from black employees that they were “treated like second-class citizens.”

The Advertiser’s reporting, which Mr. Dees bitterly disputes to this day, caused a stir but no enduring changes, employees said.

“They weren’t even trying to be diverse in terms of reflecting the people who they served,” said Dana Vickers Shelley, a former staff member who was among the highest-ranking black employees at the center.

When Ms. Shelley told Mr. Cohen of her resignation, she recalled that he asked what a subordinate, a black woman, intended to do. Ms. Shelley said she replied that she did not know.

“His response to me that I will never forget was, ‘Well, the 13th Amendment says she can do whatever she wants,’” said Ms. Shelley, who left the organization in 2014. (The 13th Amendment abolished slavery.)

Former employees said racially callous remarks at the center were not uncommon, and that professional voices of people of color were often sidelined, affecting the center’s work and priorities. Questions swirled over equal pay and advancement. There were sporadic pledges to try to address these inequities, but they persisted.”

On another website, we have created an SPLC page with only a few mainstream news articles on the SPLC.

We note that the SPLC told the Associated Press in 2011 that the Dustin Inman Society was not a “hate group” under their contrived “let’s get more donations” ratings of pro-enforcement groups. That changed within days of the SPLC beginning its registered, race baiting lobbying campaign against legislation we helped create and supported under the Gold-Domed Georgia state Capitol.

We are currently involved in a defamation lawsuit against the SPLC in federal court. 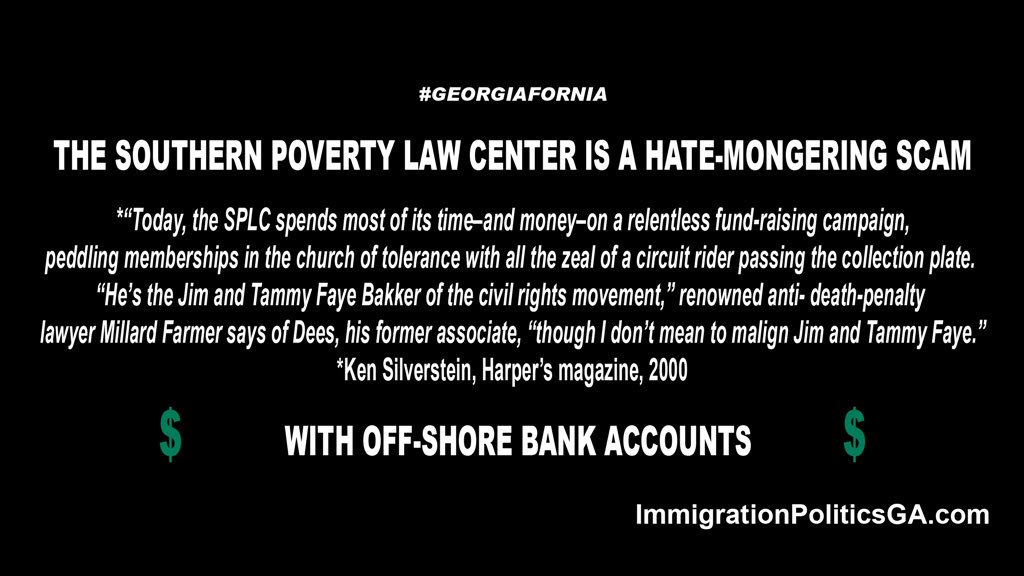