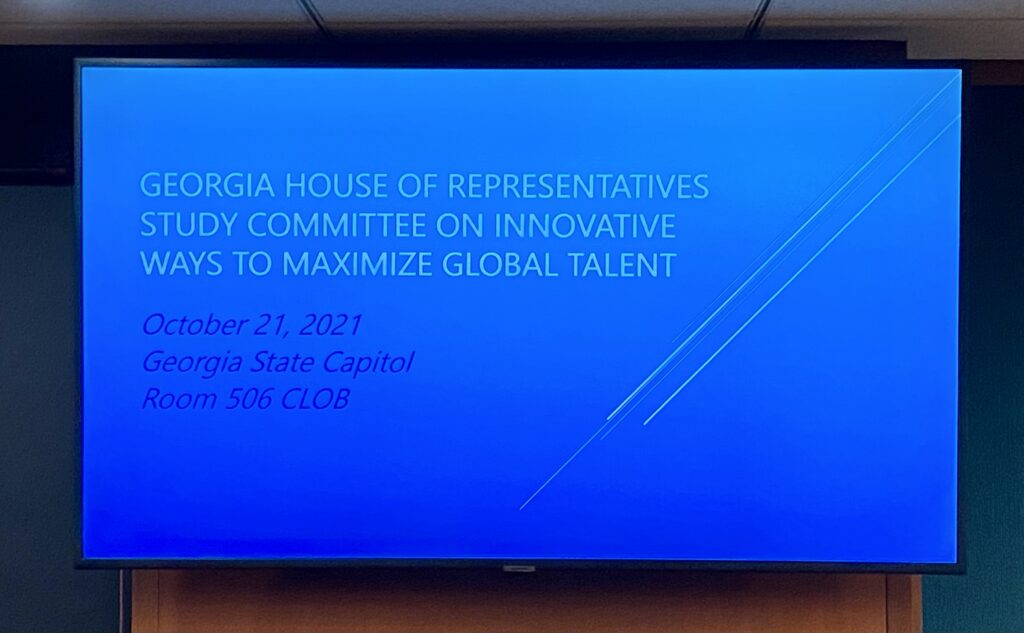 See also our four-part write-ups of the study committee meetings created by the Resolution covered in this story. dak

Editor’s note/Correction: An earlier version of this article stated that the Home Builders Association of Georgia had offered testimony in support of HB 120. While the association did offer vocal support for HR 11 on global workforce development, it has not issued any formal testimony in support of the former bill (HB 120). The article has been updated to correct this error.

Immigrant advocacy groups are urging business backing for a raft of proposed legislation at the Georgia General Assembly they say would enhance talent access and recognize foreign-born workers’ role in the state’s economic vitality.

One in seven Georgia workers is foreign-born, and these non-native residents own nearly one-third of all businesses in the state. Their success helps boost the local economy and showcase Georgia as a welcoming environment for small businesses, resettlement and advocacy groups argue.

CRSA is asking for business to lobby their legislators in support of bills that would remove barriers to higher education, vocational assistance, licensing and medical care for the 1 million foreign-born residents that make up about a tenth of the state’s population.

Refugee- and immigrant-owned businesses provide jobs for 200,000 Georgians and produced more than $33 billion in sales in 2018. Some 22 percent of workers in Georgia’s critical STEM (science, technology, engineering and math) industries were born outside the U.S.

“We are always looking for input from the business community,” said Darlene Lynch, chair of the Business & Immigration for Georgia (BIG) Partnership, a CRSA initiative that links business and civic leaders in promotion of new Americans’ economic participation.

While the resolution would not have the force of law, supporting it sends a message ahead of more potentially controversial bills that affect immigrants, Ms. Lynch said.

The bill would offer in-state tuition for Deferred Action for Childhood Arrivals (DACA) recipients, or “Dreamers”  — those students who graduated from Georgia high schools but have no legal status in the United States because they were brought here as small children.

Co-authored by Rep. Kasey Carpenter (R-Dalton), Mr. Cantrell and others, the bill has been well-received by some business organizations.

Advocacy groups such as FWD.us have been working for the past two years on similar state legislation to reach bipartisan consensus on tuition equity for Dreamers, said Sam Aguilar,FWD.us state director in Georgia.

“At the state level, we’re focused on immigration policy that brings communities together and brings stakeholders like the business community, immigrant advocates and faith leaders to build broad consensus and shift the culture of how we discuss immigration issues in the Georgia General Assembly,” Mr. Aguilar said.

Mr. Carpenter and those crafting the bill see it as a “firewall” between the federal and state activity, Mr. Aguilar said. If the federal Dream Act passes, undocumented students would receive a pathway to citizenship or permanent legal residence. But Georgia DACA recipients would be eligible for in-state tuition under HB 120, regardless of their status.

“No matter what happens at the federal level, the state efforts would be minimally impacted,” he said.

Mr. Aguilar and others argue that in-state tuition for Dreamers is a “workforce development solution” at a time many employers are struggling to find good help.  Improving access to higher education and creating better-prepared, more professional workforce, he said.

Shoring Up the Health Care Workforce

Another bill in question HB 209, which would create a fee-for-service Medicaid expansion program for eligible uninsured Georgians, including an option for small businesses to offer the program to employees.

This would help manage health costs for immigrants who may lack health insurance, even as they play a vital role in fighting the COVID-19 pandemic as doctors and nurses treating the illness and doling out vaccines.

With one-fifth of all Georgia doctors and health aides being foreign-born, advocates stress the need for policy change that helps these medical professionals fulfill their educational requirements and get their professional licenses in order to address workforce shortages, particularly in rural parts of the state, noted Omar Aziz, an Iraqi-born refugee who leads the International Rescue Committee’s COVID-19 testing outreach in Atlanta.

State legislative and advocacy efforts are taking place amid a flurry of federal activity on immigration and refugee resettlement.

With the Biden Administration announcing the expansion of the U.S. refugee quota to 125,000 refugees for fiscal year 2022, Georgia refugee assistance groups are ramping up preparations to place new arrivals in jobs around the state.

“This [increase in refugee admissions] will greatly impact us. We’re excited about it,” she told Global Atlanta.

Georgia is usually the tenth state in number of refugees resettled in the U.S. Based on historical averages, a national refugee admissions ceiling of 125,000 in FY22 would equate to about 5,000 new arrivals into Georgia; about 2,700 of those would be resettled by the IRC in metro Atlanta, many of them in Clarkston.

During the virtual New Americans Celebration, CRSA Chairman Jim Neal said he was “very encouraged” to see the U.S. returning to higher levels of refugee resettlement – with a revised FY21 ceiling of 62,500 refugees — after the historic lows of the past several years under former President Donald Trump.

The coalitions’ member organizations must be ready to act, he said.

“We must make sure we can provide safe and high-quality welcome and support [for refugees] and work through the process equitably and fairly,” he said, adding that resettlement has wide public support in Georgia and nationally.

Mr. Cantrell and Ms. Lynch are also confident that Georgia legislators will be interested in promoting refugee and immigrant interests via House Resolution 11.

Over the next year, HR 11’s proposed study committee —composed of five General Assembly members selected by the Speaker of the House, one business community member and one foreign-born member —will meet in various cities around the state to come up with legislative ideas that improve opportunities for Georgia’s foreign-born.

“There’s already a lot of clamor to be on the committee, although there are only five spots. But everyone can participate and give input, even if they’re not on the committee,” Mr. Cantrell said, noting that many of his colleagues in the State House represent districts with high immigrant populations or are foreign-born themselves. He stressed the need for input from rural as well as metro area communities.

Beyond legislative support, organizations like the IRC and Inspiritus are working with Georgia employers to find jobs for refugees. One of the IRC’s latest initiatives is a refugee internship program that matches refugees with Atlanta companies.

Inspiritus Director of Refugee and Immigrant Services Aimee Zangandou said her organization is helping refugees to “hit the ground running” and has them working within six months of arriving in the state.

Amplio Recruiting, an Atlanta-based staffing agency focused on refugees, sees 80 percent retention after three months, and after a year, 73 percent of refugee workers are still employed at their companies.

“It has nothing to do with us,” Amplio founder and CEO Chris Chancey said during a Next Generation Manufacturing discussion on alternative workforce solutions Jan. 28.  “It’s the fact that these individuals are highly motivated and want to be able to contribute to the local economy and play a pivotal role in the community and live out that American Dream.”

Ms. Lynch welcomed more business community members to sign up with the BIG initiative to receive tailored updates on refugee and immigration issues or to participate in lobbying efforts.

“The question is what kind of state do we want to have for everyone? That sets the tone for welcoming refugees and immigrants,” Mr. Neal said. “We want to make Georgia a state where everyone feels welcomed and empowered. Join us in this work.” 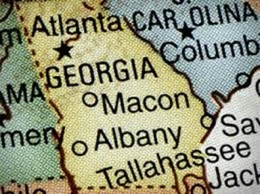 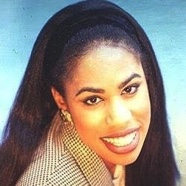