According to screenshots shared exclusively with The Federalist, Twitter locked Morgan’s account Wednesday afternoon for apparently violating platform rules governing “hateful conduct” after the commissioner attempted to tweet about the wall’s benefits.

The Georgia Chamber of Commerce was kind enough to help us answer with the below Twitter post. It’s from the July 20, 2021 “Rural Prosperity Forum” they held in Tifton, GA. These meetings are part of a series. 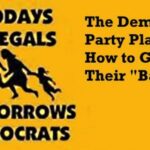