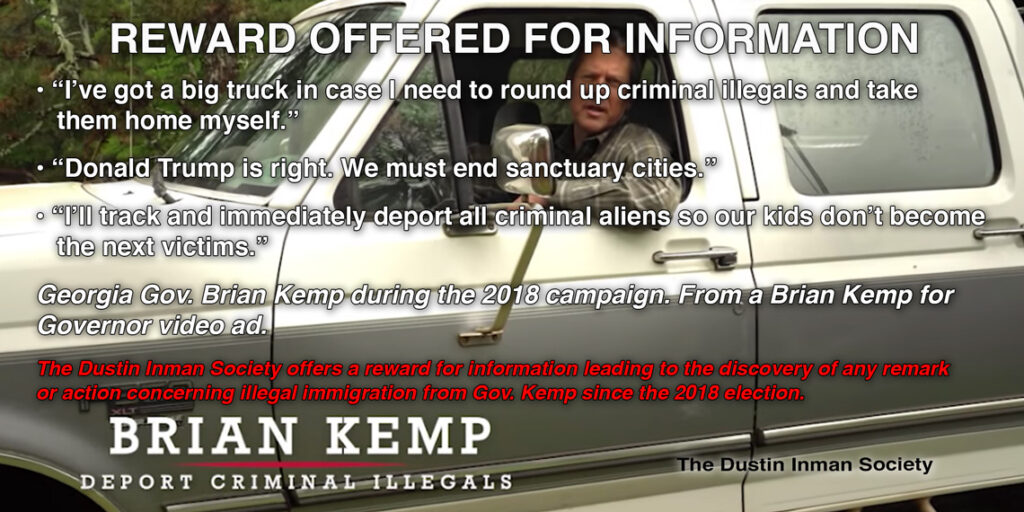 WHEREAS, Innocent Georgians are murdered and American families are separated forever while we suffer crimes of rape, kidnapping, child molestation, drug dealing and job, wage and identity theft by illegal aliens; and

WHEREAS, We remember candidate Brian Kemp’s campaign rhetoric associating himself  and agreeing with then-President Trump on illegal immigration; and

WHEREAS, We remember Candidate Kemp’s detailed 2018 campaign promises on legislation addressing sanctuary cities, creating a registry of criminal aliens, a Kemp “Track and Deport Plan” and a constantly televised statement “I’ve got a big truck in case I need to round up criminal illegals and take them home myself”; and

WHEREAS, Governor Brian Kemp is silent as Democrat sheriffs end 287(g) agreements with DHS and defy long-standing state law (OCGA 42-4-14) he voted for as state senator requiring all jailers to investigate the immigration status of incoming prisoners and report illegal aliens to DHS; and

WHEREAS, Governor Kemp has betrayed President Trump, pro-enforcement voters, and since becoming Chief Executive has defiantly ignored illegal immigration and his related campaign pledges; and

NOW, THEREFORE, BE IT RESOLVED BY THE Georgia Republican Party that the delegates of this convention and its executive committee do hereby  strongly rebuke Governor Brian Kemp.

“Historically, an invasion of this magnitude usually is a consequence of losing a war.”

Border security/ illegal immigration polls as one of voters’ top concerns along with inflation, crime, abortion, and the economy in general. GOP governors such as Ron DeSantis and Greg Abbott are doing what they can to address the problem, but since border security is fundamentally a federal matter, their powers in this regard remain limited. The GOP minorities in the House and Senate also are limited in addressing the problem — constrained primarily to highlighting the problem and proposing alternate policy prescriptions. Nonetheless, given the scale of the debacle, congressional Republicans — with a few exceptions — have been far less vocal and energetic than the circumstances would predict. Consider: