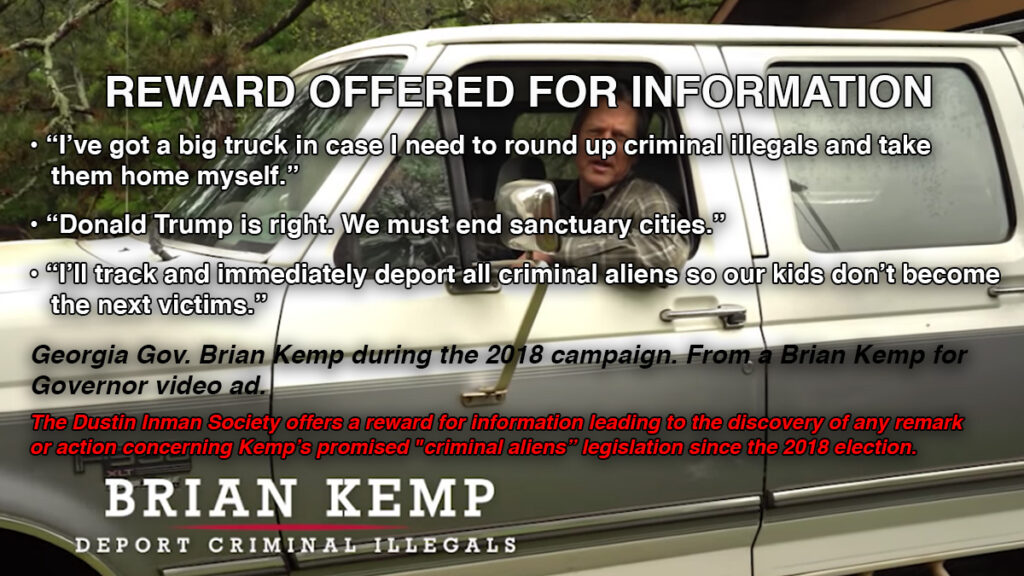 The Dustin Inman Society offers a reward for information leading to the discovery of any comment, action or order from Gov. Kemp regarding his promised “criminal aliens” legislation since his election in 2018.

We also note that many Republican voters seem shy about reminding Gov Kemp of his promises on the issue that is killing Georgians and sapping our state budget. Gov Kemp was silent when we needed him to help pass an (another) anti-sanctuary bill in the state legislature in the 2020 session. That bill was originally HB915 and later HB1083. The illegal alien lobby won again. the measure died in the Republican-ruled state Capitol.

Below we offer some reminders of the promises made by a campaigning Brian Kemp. Also below are examples of letters published in Georgia newspapers that were written by angry citizens who are not willing to accept the business-first betrayal from the governor on illegal immigration. Also displayed here is a note on Kemp and broken promises by Mr. Thomas Homan, the former Acting ICE Director, in a Fox and Friends appearance in early 2020. Here is a news report on Mr. Homan condemning Gov. Kemp.

We plead with Georgians to contact the office of Gov Brian Kemp ( 404-656-1776 and online here) to urge him to honor his pledge on illegal immigration. We are pretty sure Gov. Kemp has ended the “do not call me” policy. 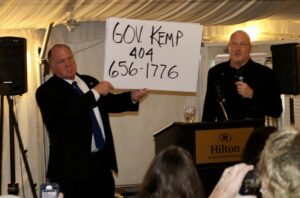 Former Acting ICE Director Thomas Homan (left) urges audience at DIS ‘Honoring Immigrants’ event to contact Georgia Governor Brian Kemp on illegal immigration and dead Americans, Feb 2020. Photo:Special to DIS. Homan was livid when we explained that Kemp had not mentioned or acted on illegal immigration after using the crisis to garner conservative support and get the endorsement from President Trump that put Kemp over the top in the primary election in 2018.

Below is a TV campaign ad from Kemp. Despite being very familiar with and  personally acquainted with the Inman family, we note that when he listed names of Americans killed by illegal aliens he didn’t mention Dustin Inman. At the time, Billy Inman  ,Dustin’s dad who is gone now, sadly noticed it as well.

While he ignored the blackmarket labor and illegal aliens accessing Georgia’s public benefits aspect of illegal immigration during the 2018 campaign Gov. Kemp did put out a very detailed promise for legislation to focus on criminal aliens and sanctuary cities. Even though states cannot deport illegal aliens, he called it his “Track and Deport Plan.” He promised to create a criminal alien database. You can see that promise and the “Kemp Track and Deport Plan”  here from the governor’s campaign site (we have it saved elsewhere as well). Our reward also applies to any information leading to discovery of any action or even any comment from Gov. Kemp on that promise since the election.

Candidate Brian Kemp, summer, 2018: “Kate Steinle, Edwin Jackson and the Cannon family, all killed by illegal immigrants. Donald Trump is right. We must secure the border and end sanctuary cities.”
I’ll do the same as your governor. I’ll enforce the ban on sanctuary cities and track and immediately deport all criminal aliens so our kids don’t become the next victims.”

Do you rember the “I got a big truck just in case I need to round up criminal illegals and take ’em home myself” TV ad? We do. Have you heard anymore from Gov Kemp about criminal illegals since then? We haven’t.

Tom Homan: “So, it isn’t the law enforcement officers that support sanctuary jurisdictions, it’s the politicians. It’s like I’m in, I’m in Georgia today, I’m giving a speech in Atlanta. Governor Kemp, who ran on tough immigration enforcement, now he’s in office, he’s missing in action. Sanctuary jurisdictions are growing in Georgia. Some police chiefs aren’t accepting retainers. So, you know, again, it’s the politicians who aren’t living up to their word. Law enforcement wants to do the right thing.”

Below is a letter the Brunswick News published from retired senior immigration enforcement officer, Robert Trent.

Letters to the editor

Kemp has yet to take action on illegal aliens

I still recall days of old when bold politicians called for reforms to protect the people of Georgia from illegal aliens. Unfortunately, as I repeatedly read stories in the press about rapes of women and children, murders and robbery, my memory brings back then candidate Gov. Brian Kemp’s promise to “track and deport” criminal aliens in Georgia.

I suppose the governor hasn’t had the time or the inclination to follow through on his promise, or was it just a politician pandering to his base? Perhaps the governor’s staff isn’t keeping him apprised of the seriousness of the current situation?

I didn’t have to look too hard to find some recent statistics for criminal aliens lodged in Georgia’s prisons. Here are the numbers and crimes for November 2019, compliments of the Georgia Department of Corrections:

I imagine the heads up at the governor’s office will roll when he finds out just how bad things have become in regard to criminal illegal aliens. Or will they?

The governor certainly has it within his authority to implement the plan he ran on.

Here are links to just a few more of the letters to editors from angry conservative, pro-enforcement voters we know of that were published across Georgia noting Brian Kemp’s silence on illegal immigration and his campaign pledges.

Governor Kemp has always been chummy with the illegal alien lobby, but when he appointed a GALEO pal and fundraiser to constitutional office, Mr. Robert Trent, the retired Border Patrol Agent and former senior INS officer, fired off another angry letter to Kemp and shared it with us. It’s worth a read: Entire letter here.

Here is a little more insight on then Secretary of State Brian Kemp and official English in a DIS blog post in from October, 2016:

“To the astonishment of many Georgia conservatives and to the glee of the illegal alien lobby, Georgia’s Secretary of State, Brian Kemp, produced five videos in foreign languages ( Spanish, Vietnamese, Hindi, Korean, and Mandarin) to help non-English speakers “on voter registration, absentee voting by mail, advance in-person voting, and Election Day voting. “These new resources will help voters who are non-English speakers know how to register to vote and prepare to cast their ballot” says Kemp. “Georgia is not a ‘covered jurisdiction’ under the federal Voting Rights Act to offer election information in other languages,” Kemp’s press release told us.

A note from D.A. King: We have known Governor Kemp since 2006 when he was a state senator. This page is only part of what we have learned about Mr.Kemp, illegal immigration, genuine conservatism and profit-first politics. We will add it to the existing Brian Kemp file that we have indexed here on the original DIS blog. We advise Republican voters to pay attention and to find the courage to talk back. And we don’t care who knows it.