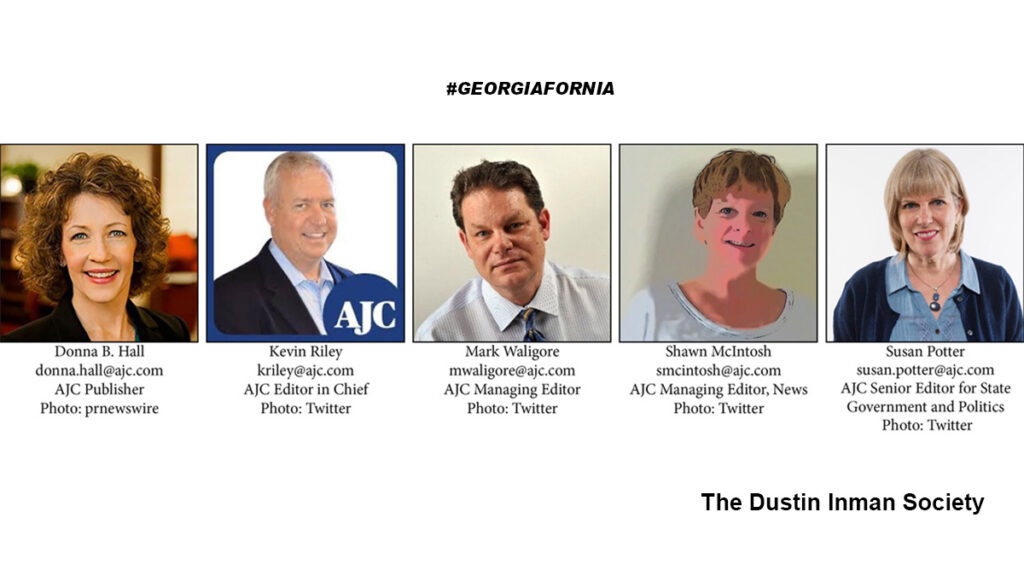 The anti-enforcement and  liberal AJC long ago became an advocacy outlet on “Americans last” state legislative issues. Sometimes they tell part of the truth on the bills they push…sometimes they don’t.

Take HB 120 – please. The legislation from Republican Kasey Carpenter had several variations, but bottom line would have granted the much lower instate tuition rates to illegal aliens in Georgia’s public colleges than Americans and legal immigrants who came to our public university system while living in other states. We are proud to have led the successful campaign to educate voters and convince legislators that putting illegals ahead of Americans is bad policy. We hope the Republican legislators who supported this goop see primary opponents and lose their coveted seats of power under the Gold Dome.

It should be noted that even after we had killed the bill for 2021, the AJC hung in there in promo work.

HB 932 is a prime example of the severely arrogant and pretense-free “journalism” from the AJC editors. The bill was conceived and supported by the massive and growing refugee resettlement industry in Georgia and sponsored by an outgoing Republican, Rep Wes Cantrell. Cantrell turned out be less of a plotting villain than a dimwit.

How bad was HB 932? House Speaker Pro Tem Jan Jones went to the House Clerk’s office and scratched her name off the bill two days after we made its contents known to voters.

Here is an AJC “news” story on HB 932 early in the 2022 session when it was first introduced. The measure would have changed state law to allow refugees, Special Visa Immigrants and thousands of Afghans to access the lower instate tuition rate in state public colleges the same day they arrive in Georgia. Note that the reporter and his editors omit the fact that the change would not apply to Americans moving here from other states or anywhere else in the world.

Here is a promo story eleven days later on the refugee industry’s event in the state Capitol to see both bills (HB 120 & HB 932) – Try to find any balance.

Then, ten days later, the AJC ran a LTE from a well-known liberal immigration lawyer, Charles Kuck, who served for years on the board of the Coca-Cola/Georgia Power-funded GALEO Corp selling the idea that we need to put “immigrants” and refugees ahead of Americans in the name of “workforce shortage. The goal here is to create a larger cheap workforce of college education skilled workers then to demand an increase on legal immigration numbers of low skilled workers and another amnesty for black market labor already here. Including the “migrants” crossing the river as I type. Not for the first time, we note things would be much different of the hordes of illegals were English-speaking, potential conservative voters streaming in from Saskathu

These pro-immigration bills would help Dreamers and all Georgians

The article references current state legislation that would break down education barriers to encourage economic and workforce growth. While current bipartisan policies such as HB 932 would benefit certain refugees, special immigrants, or those with humanitarian parole status, HB 120 would provide tuition equity for undocumented young immigrants.

Nearly 30,000 young Georgians who came to the U.S. as children – or Dreamers – have lived most of their lives here but can’t adjust their legal status due to our antiquated immigration system. While dreamers, and all Georgia immigrants, contribute upwards of $10 billion in taxes annually, they are limited in their contributions to society because of senseless policies.

It is my hope our state and federal lawmakers pass pro-immigration policies that benefit all Georgians.

The AJC opinion editor would not, however publish my letter sent several days after Kuch’s that offered a full explanation of both bills. I know he received it because he responded.

My unpublished letter to the editor:

Billed as “pro-immigrant bills,” several measures under the Gold Dome are being pushed by members of both parties that put Americans last in Georgia. The agenda is clear and it originated long before any “labor shortage” endlessly cited by the special interest supporters.

HB 932 is the product of the wealthy and increasingly powerful refugee resettlement industry’s input on public policy in Georgia. It’s easy to understand if fully explained. Current state law requires new residents to wait twelve months before they are eligible for the much lower instate tuition rates in our taxpayer-funded colleges. The bill removes that waiting period for refugees, many Afghan “migrants” and “Special Immigrant Visa” holders. But not for your American nephew who moves to Georgia from any U.S. state.

HB 120 provides the lower instate tuition rate for illegal aliens with Obama’s DACA deferral on deportation. But not your American niece living in another state who wants to attend a public Georgia college.