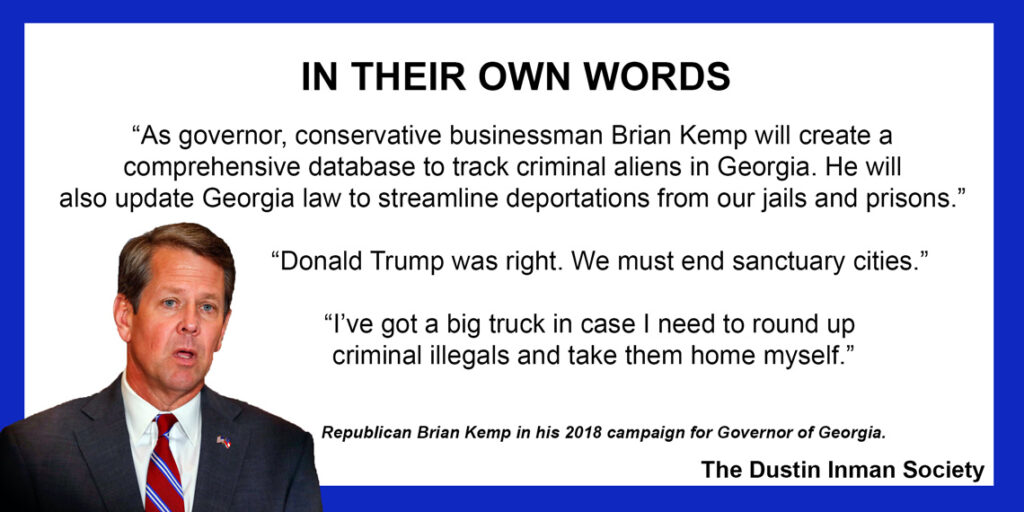 Governor defiant in silence on misery of trusting Georgians

That Governor Brian Kemp has a reelection problem is not news. The fact that much of it concerns Georgia’s illegal immigration crisis and Kemp’s broken promises on that topic will likely never be in “the news.”

As noted by the liberal AJC at the time, Kemp’s first TV ad in the 2018 Republican gubernatorial primary cited Americans who had been killed by illegal aliens and portrayed him as “tough on illegal immigration.”

During that summer Kemp went on to pledge to end sanctuary policies in Georgia and to create a registry of criminal aliens. Many observers, including this one, attribute then-President Trump’s final decision to endorse Kemp in the primary to his pro-enforcement claims on illegal immigration.

“As governor, conservative businessman Brian Kemp will create a comprehensive database to track criminal aliens in Georgia.  He will also update Georgia law to streamline deportations from our jails and prisons” went the detailed promise Kemp made on his 2018 campaign website. . Update Dec. 3, 2021: We see that the “Track & Deport Plan” has been deleted from the 2022 campaign site. We found the old page on the Wayback Machine site and have updated the link in the next sentence.  It’s part of the Brian Kemp “Track and Deport Plan.” Never mind that governors have no authority to deport anyone.

Note that the “watchdog media” is silent on the fact that Kemp has not so much as commented on these campaign promises since the 2018 primary.

One can only imagine the howls of outrage from Georgia’s agenda-driven press if Kemp had pledged to push legislation to give illegal aliens instate tuition and then silently betrayed that promise.

Perhaps the Kemp TV ad from 2018 that best illustrates his apparent contempt for GOP voter’s intelligence and memory was the now famous TV hit in which he told us “I got a big truck in case I need to round up criminal illegals and take ‘em home myself. Yep, I just said that.” In total, we refer to Kemp’s empty promises on illegal immigration in Georgia as “the Big Truck Trick.”

Today marks the twenty-first anniversary of sixteen year-old Dustin Inman’s death by illegal immigration. Last week was the second anniversary of Dustin’s dad, Billy Inman’s heart stopping. Earlier this month Kathy Inman, Dustin’s mom, had to be moved from her family home in Woodstock to a nursing home. Update, Dec. 3, 2021: Kathy Inman died in the nursing home on August 26, 2021 as a direct result of the injuries sustained in the 2000 crash. Both Billy and Kathy passed in their mid-fifties.

Dustin was killed when an illegal alien plowed into the back of the Inman family car stopped at red light in Ellijay. The working class American family was on their way to the N. Georgia Mountains for a much-anticipated Father’s Day weekend of camping, fishing and fun. The force of the horrible crash put Billy and Kathy in lengthy comas. When they woke up they were informed their only child was gone forever. And because of the brain and spinal injuries to Kathy inflicted in the crash, she would spend the rest of her life in a wheelchair. Then came news the illegal alien who caused this horror-show nightmare had escaped local police custody and was likely back in his native Mexico – and that he had been released after contact with local law enforcement multiple times before killing Dustin.

Most of us who knew Billy Inman understand the real cause of his death was heartbreak at losing his “best buddy” and exhaustion from nineteen years of lovingly caring for Kathy while ceaselessly working to find Dustin’s killer. The Inman family was destroyed because an illegal alien was allowed to cross our border, given a job and repeatedly sent on his way by American law enforcement.

Kemp didn’t cite Dustin Inman or the Inman family in his examples of victims of illegal aliens. That did not go unnoticed by Billy Inman before his death.

Reflecting the outrage and sentiment of many conservative independent voters, retired federal immigration agent and pro-enforcement conservative Robert Trent has distributed an open letter expressing his own anger at Kemp’s “Big Truck Trick.” From the Georgia coast Trent, former number two at Brunswick’s Federal Law  Enforcement Training Center (FLETC), says he may not vote for Kemp in 2022. He is not alone. Trent’s letter is worth a read. So is Kemp’s reply.

Gov. Kemp won the 2018 General Election with a thin margin of 54,723 votes out of 3,939,328 cast. After such adamant and clear pro-enforcement campaign promises, what must the level of arrogance and commitment to the special interest groups that oppose immigration enforcement be to risk a loss to the Democrats in 2022 by ignoring those promises and the safety of trusting Georgians?

D.A. King is president of the Dustin Inman Society and proprietor of ImmigrationPoliticsGA.com. He is not a member of any political party.